Paul Obambi, the man at the top of Congo-B's private sector tree

Sixty one year old Paul Obambi has been president of the Brazzaville Chamber of Commerce, Industry and Trades (CCIAM) since 1998. More importantly, however, he is Congo-Brazzaville's leading private sector entrepreneur. His Sapro group, with its 14 subsidiaries, covers most of the country's key business sectors. Obambi, who is reputed to be authoritarian, has built up his position through his connections with the regime of Denis Sassou-Nguesso. Founded in 1992, Sapro is active in oil trading through Sapro Oil, a company set up in 2007 following the group's acquisition of a 50% stake in X-Congo Oil from Lynx. The same year, Sapro moved into lubricants and agricultural inputs through the acquisition of Ufalu from Société Nationale des Pétroles du Congo (SNPC). Ufalu, which was renamed Solupac, is headed by Alphonse Obambi-Itoua, one of Paul Obambi's brothers.

Family management is one of Obambi's trademarks. He likes to ensure that his brothers get top positions at all times. Another of his brothers, Raymond Obambi, heads construction company Getrab. Sapro is also active in the mining through its subsidiaries, Afrimines and Socin Mines, which mine deposits of iron ore, potassium and manganese. The group also owns an advertising company called Media International, which is established in Congo-Kinshasa, Central African Republic and Ivory Coast, as well as PVC manufacturer Sapro Plastique, three bottling plants run by Sapro Boissons and soap manufacturer Sapro Savons.

Other assets are managed through shareholdings. This is the case for Azur Télécom, a subsidiary of Bahrain-based telecommunications group Bintel which is managed by another brother, Jean-Bruno Obambi. Sapro has also set up numerous partnerships in Congo-Brazzaville with international groups like Air France, Heineken, Bolloré, JC Decaux, Airtel and MTN.

Beyond the family circle, Obambi's prominent position in the national economy was favoured after the civil war by Denis Sassou Nguesso's encouragement of a new generation of entrepreneurs who came like him from the north of the country. Friendships with his fellow Mbochis from Ollombo also played a role. Within the ruling regime, the Ollombo Mbochi clan, which comes from the Plateaux department in central Congo-B, is engaged in direct competition with the Mbochis from Oyo, who include Denis Sassou Nguesso himself and Jean-Jacques Bouya, and the Mbochi from Boundi, Rodolphe Adada and Denis Gokana among them, for control of the country's principal revenue flows.

Obambi relies on his mentor, General Pierre Oba, to maintain good relations with the president's inner circle and draws, too, on his relationship with Jean-Bruno Itoua, formerly the presidency's representative in the oil sector. Itoua introduced him, notably, to Charlotte Ovunda Makanda, a personal friend of first lady Antoinette Sassou Nguesso.

The Sapro boss is also a freemason and belongs to the Grande loge du Congo (GCL), which is headed by the Congolese head of state in person. He has numerous business contacts outside this immediate circle, however. His friend, Stève Gentili, chairman of the French banking group, BRED-Banque Populaire, and the supervisory board of the BCPE group, helps him to forge contacts with the European business world. In return, Obambi helped Gentili set up a subsidiary of the banking group in Brazzaville.

These international contacts are consolidated by La Maison de l'Afrique, which Obambi heads. Based in Paris with the task of promoting the economies of 10 francophone African countries, including Benin, Burkina Faso and Central African Republic, this body enables him to play the role of intermediary with foreign investors. At the end of 2015, wearing his hat of president of the Brazzaville chamber of commerce, which is a member of the Maison de l'Afrique, he played guide to an impressive Turkish business delegation in Congo-Brazzaville.

Born into a modest family in Brazzaville's Poto-Poto district, Obambi obtained a degree in economics from the capital's Université Marien-Ngouabi in 1979 and also has an principal inspector's diploma from the further training centre for postal and telecommunications executives in Toulouse, France. In 2010, he was exceptionally made grand officer of the Congolese order of merit. Obambi is married to Claudine Nkouka, an Iari from Pool in southern Congo-B who lives in Paris's smart 16th arrondissement. Obambi himself has a French residency permit but is also a frequent visitor to London, where one of his daughters lives. 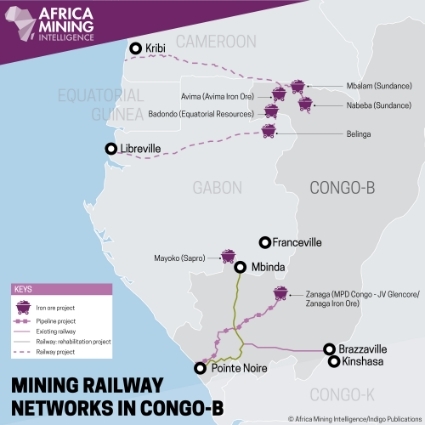 In the near-bankrupt state of Congo-B, global sector giants and local players are keen to develop the country's iron ore resource despite the hurdles standing in their way: poor transport facilities, a lack of power and massive investment. [...]

The Mbochis remain at the helm of the SNPC

Despite extensive restructuring in recent months, the oil company remains firmly in the hands of the president's ethnic group. Analysis. [...]

Candidates are lining up to succeed Yves Castanou as head of the Republic of Congo’s strategic telecommunications regulatory body ARPCE. [...]

Denis Auguste Marie Gokana has little taste for socialising and is relatively secretive about his professional and personal activities. He [...]

The country's oil resources provide the Republic of Congo's president with an effective way to buy peace and quiet among those closest to him. [...]

Paul Obambi,
the man at the top of Congo-B's private sector tree